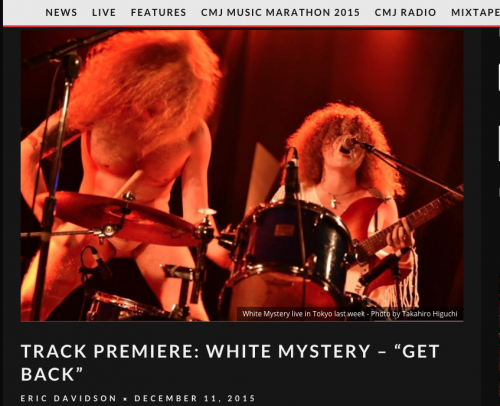 Last spring, brother/sister punk-crunch blues duo White Mystery released an excellently zany movie about their lives in the tour trenches called, appropriately, That Was Awesome. As arguably the hardest working band in gutter rock, the two (moonlighting as flick directors too) were in a perfect position to nab a ton of clips of wild parties, sweaty fest gigs, drunken making out sessions, pizza delivery apes, and more.

It’s been screened at Chicago International Music & Movies Fest, the Doc’n’Roll Film Fest in London, Volume Fest in Washington and in theaters with properly absorbent seats here and there since. Now you can buy or rent it yourself right here right now. You can also check out the full soundtrack album at their Bandcamp.

And if all that wasn’t enough for you, now they’ve got a new version, recorded at Converse Rubber Tracks NYC, of a way longer tune from the soundtrack, and we’re premiering it today. And we’ve gotta say, this new, expediated, sizzling version of “Get Back” beats the album’s already killer stomp-out. Check it out, and the That Was Awesometrailer, below.

Posted in News, Press Tags: CMJ, Get Back, that was awesome, Track Premiere, white mystery
← Previous Next →