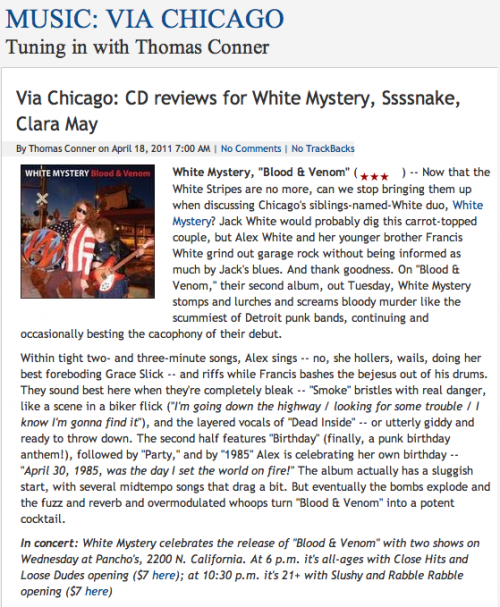 White Mystery, “Blood & Venom” (***) — Now that the White Stripes are no more, can we stop bringing them up when discussing Chicago’s siblings-named-White duo, White Mystery? Jack White would probably dig this carrot-topped couple, but Alex White and her younger brother Francis White grind out garage rock without being informed as much by Jack’s blues. And thank goodness. On “Blood & Venom,” their second album, out Tuesday, White Mystery stomps and lurches and screams bloody murder like the scummiest of Detroit punk bands, continuing and occasionally besting the cacophony of their debut.

Within tight two- and three-minute songs, Alex sings — no, she hollers, wails, doing her best foreboding Grace Slick — and riffs while Francis bashes the bejesus out of his drums. They sound best here when they’re completely bleak — “Smoke” bristles with real danger, like a scene in a biker flick (“I’m going down the highway / looking for some trouble / I know I’m gonna find it”), and the layered vocals of “Dead Inside” — or utterly giddy and ready to throw down. The second half features “Birthday” (finally, a punk birthday anthem!), followed by “Party,” and by “1985” Alex is celebrating her own birthday — “April 30, 1985, was the day I set the world on fire!” The album actually has a sluggish start, with several midtempo songs that drag a bit. But eventually the bombs explode and the fuzz and reverb and overmodulated whoops turn “Blood & Venom” into a potent cocktail.