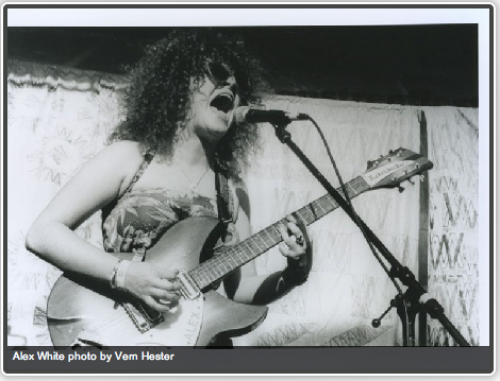 The first time that I ever laid eyes on Chicago’s White Mystery was at last summer’s Taste of Chicago. There on a side stage stood Alex White, dressed in a business suit with her hair, a violent explosion of flaming red, wilting in her face, shredding notes on her electric guitar and screaming her lungs out. Her brother, Francis, I didn’t actually see—just flashes of more red hair behind his drum kit. At this point the Whites, after touring and gigging nonstop since then have emerged as this summer’s breakout band. It certainly doesn’t hurt to finally have their sophomore recording, Blood and Venom (http:// www.whitemysteryband.com) ;, is finally out and I have to say that it’s a pleasure to have there noise in the house.

“Noise” is actually putting it politely, since White Mystery construct monolithic slabs of shrieking guitar and thunderous percussion with enough echo to make them sound like they were recorded at the bottom of an empty well. In short, this record is meant to be enjoyed loud—really LOUD. What makes White Mystery’s sound so distinct and fun are the components that the two of them bring to the table. Alex’s guitar-playing is thick, driven, crunchy, snarling and extravagantly melodious. Better still, she has a voice like a siren (the mythical seductress, not a car alarm) that she seems to have loads of fun contorting and twisting. (She barks on “Snack Culture,” gets dreamy on “Pumpkin Creme” and bratty on “Smoke.”) Francis, on the other hand, pounds his skins with such intensity that it’s hard to differentiate his licks (probably intentional) and when his voice pops up on the second half of the CD on “Birthday” and “Party,” he sounds like a half-crocked rascal (ditto).

This, believe it or not, is with all that high decibel bamma-lamma that makes them kind of endearing and, well, cuddly. When Alex growls, “I don’t want to be a good girl/I just wanna be bad,” on “Good Girl,” she sounds like such a saucy vamp that you’re forced to hope with utmost sincerity that she gets her wish. “Party,” with its stair-stepping Phil Spector-like guitar figures and “Dead Inside,” a particularly lively rave-up about depression via a Pete Townshend guitar riff, nearly steal the album. Although the closer, “Kickin’ My Ball,” is as yummy a summertime single as we could hope for this year, it’s nearly upstaged by what came before it. Still, Blood and Venom, for all of White Mystery’s fury and passion, is such a joyous cyclone ride that you wonder what took them so long to record and release it.  READ THE FULL ARTICLE HERE.

Posted in Press Tags: do division, live show, taste of chicago
← Previous Next →