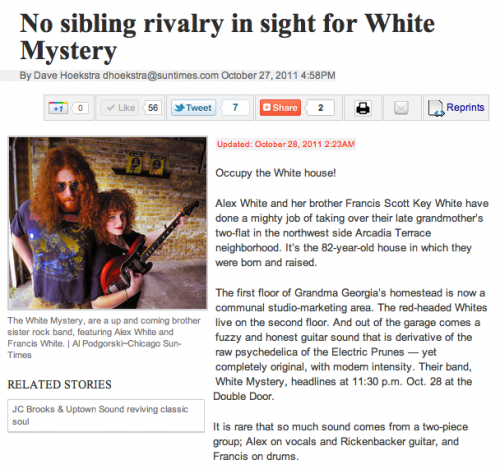 Occupy the White house!
Alex White and her brother Francis Scott Key White have done a mighty job of taking over their late grandmother’s two-flat in the northwest side Arcadia Terrace neighborhood. It’s the 82-year-old house in which they were born and raised.

The first floor of Grandma Georgia’s homestead is now a communal studio-marketing area. The red-headed Whites live on the second floor. And out of the garage comes a fuzzy and honest guitar sound that is derivative of the raw psychedelica of the Electric Prunes — yet completely original, with modern intensity. Their band, White Mystery, headlines at 11:30 p.m. Oct. 28 at the Double Door.

It is rare that so much sound comes from a two-piece group; Alex on vocals and Rickenbacker guitar, and Francis on drums.

“I’d listen to the Beatles and the Everly Brothers as a kid,” Alex, 26, said over lunch with her 24-year-old brother at their kitchen table. “But when I heard the Who in fourth grade it was like a lightning bolt listening to ‘Baba O’ Riley.’ I didn’t want to play a Fender or a Gibson. I wanted to be really distinctive with the Rickenbacker. And Pete Townshend played a Rickenbacker 330. (As does Tom Petty and Jimmy Page.) I’ve had this guitar since I was a teen. Its vintage now. I just crank everything up and that’s the sound. Poison Ivy from the Cramps is who I look up for a guitar influence. Dirty, rockabilly, reverb-drenched, hollow-bodied guitar sound.”

“We record it live, first take, second take,” explained Francis, whose father is a Pennsylvania Dutch descendant of “The Star-spangled Banner” songwriter, Francis Scott Key. Alex added, “We go into the studiowell-rehearsed. A lot of bands need three weeks to nail a song. Obviously we spend a lot of time together so the dynamic is very tight. We record our albums in two six-hour days. Our first (self-titled) record was 14 songs, the same way. We recorded it in a steel factory at Western and Grand.”

Such harmony between the siblings is rare in rock music circles. White Mystery has none of the storied conflict of the Beach Boys, Oasis or the Everly Brothers.

“Fran I and live together, tour together, run the record label together,” Alex said. Fran added, “Its’ delightful. Alex and I have always complemented each other as far as skills and approaches to songs and albums. Even before we started playing music we were sort of a dynamic duo I guess.” “Of course we poke fun at each other, but we can trust each other,” Alex said. “Sometimes you’re in a band, you gotta’ wake everyone up. Where did someone go last night? This one’s a vegetarian, this one needs his meat every day. You’re always balancing personalities. And I’ve been in that band. (The Hot Machines, Miss Alex White and the Red Orchestra). Not only is it great being in a band with my brother but it is great being in a two-piece where we tour in a hatchback. (Alex estimated that White Mystery has toured 30,000 miles and has done 120 shows this year across North America.) While we look kind of similar we have very different roles.”

For example, before our recent visit, Alex and Fran were working on a new song with call and responses.

Fran said, “She does a little lick, I do a little drum roll and we pass it back and forth. We communicate with eyesight when we play music and anticipate each other’s moves. We’ve been playing music together for so long.” Alex looked at Fran and said, “One thing we talk about all the time is, ‘You go high, and I’ll go low, you go low, I’ll go high. We’re partners in writing music as well, so if I’m playing something really bassy you can hit the cymbal.’ Or like when we’re doing a riff together I don’t want to play the same riff as Francis at the same time. I want them to be staggered so they complement each other. If we play the same beat at the same time people are just going to hear noise. But if you intertwine your riffs you’re making melodies and music.”

“Its honest,” Alex said. “We carry the super DIY garage ethic to shows. When we played in front of 5,000 people before Weezer (earlier this month at the Congress Theater), the set that Francis played was the same set where he broke a pane of glass in our new MTV video (“Birthday”). We’re entertainers, but we’re not putting on airs. This is music that naturally comes out of these two people.”

White Mystery mother Diane Alexander White does all of the band’s photography. Alexander White had been natural history photographer at the Field Museum for 25 years. “What she’s best known for pop culture-wise are her photos of (Steve Dahl-Mike Veeck’s) Disco Demolition in 1979,” Francis said. “She was just taking in the game from the stands.” Alex added, “If you of think of that being our mom, it explains a lot about our rock ’n’ roll history.”