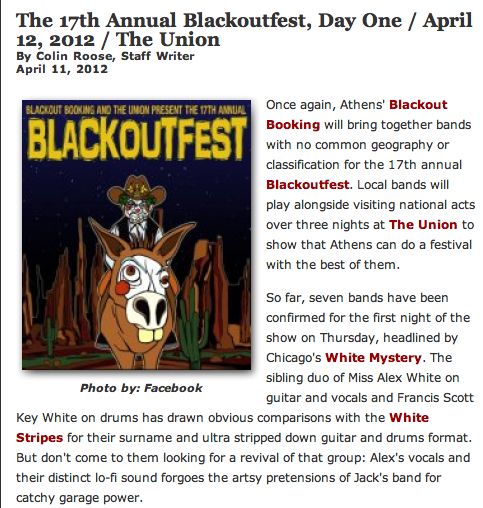 Once again, Athens’ Blackout Booking will bring together bands with no common geography or classification for the 17th annual Blackoutfest. Local bands will play alongside visiting national acts over three nights at The Union to show that Athens can do a festival with the best of them.

So far, seven bands have been confirmed for the first night of the show on Thursday, headlined by Chicago’s White Mystery. The sibling duo of Miss Alex White on guitar and vocals and Francis Scott Key White on drums has drawn obvious comparisons with the White Stripes for their surname and ultra stripped down guitar and drums format. But don’t come to them looking for a revival of that group: Alex’s vocals and their distinct lo-fi sound forgoes the artsy pretensions of Jack’s band for catchy garage power.

According to Alex, the “eureka” moment when she and her brother wanted to join forces came from none other than a particular brand of taffy.

“We saw an Airhead candy wrapper that said ‘White Mystery, Out of Control,’ which, you know, is a type of candy,” she said. “And just that phrase and name was kind of like a lightning bolt, where it was just like, ‘Whoa, white mystery, out of control. That’s us! We should start a band.'”

That day happened to be April 20, 2008, and they have chosen the date to release their records every year since 2010. Keeping with the tradition, next Friday will see the release of the three-song EP People Power (Sea of Infamy).

White Mystery has received acclaim for their music videos, one of which, “Birthday,” received a Top Video award from MTV. The second song on their new record, “Rapid Overdrive,” will get the film treatment as well, with a slightly different feel from the cake-destroying and fireworks of “Birthday.”

“It’s a stop motion animation video with cartoons in it. So, it’s one of the most elaborate videos we’ve done yet,” Alex said.

The group has toured extensively since its inception, going as far out as California and Ontario, while also keeping busy in their native city. Despite all the venues they’ve played, Alex said that the scene never changes much anywhere they go.

“What you find, of course, is that the rock ‘n’ roll community spans the nation, the world, and there’s a lot of shared similarities as well,” she said. “So, people bring their culture into the mix with their music, and how they like to party and what they like to drink and where they hang out. But, there’s definitely a shared passion for rock that all of these different people have.”

Part of this touring included a grueling stint at this year’s South by Southwest conference, during which time the band played just about anywhere Austin could hold a concert.

White believes that the band’s sibling format has advantages that distinguish them from all the other faces in the garage rock crowd.

“We are constantly practicing, and developing new techniques together, and we complement each other musically, that creates the full sound that comes out of two people,” she said. “And for the future releases, we share a lot more of the vocal duties, so you’re getting like, a male and a female voice, creating harmonies, you know, just exploring different instruments.”

White Mystery will be up first for Blackoutfest’s opening night this Thursday and will set the mood for a whirlwind showcase weekend. Tickets are $8 for each night individually and $20 for all three nights, and are sold at Haffa’s Records. Thursday night’s doors open at 8 p.m.