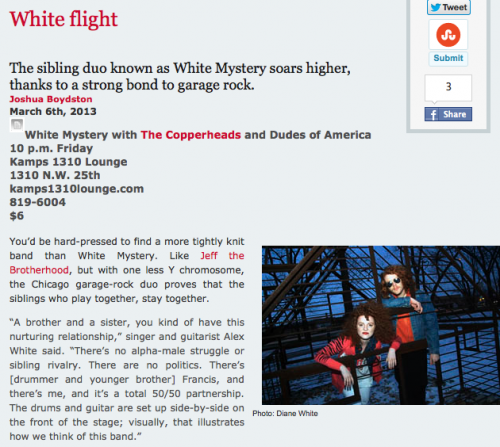 The sibling duo known as White Mystery soars higher, thanks to a strong bond to garage rock.

You’d be hard-pressed to find a more tightly knit band than White Mystery. Like Jeff the Brotherhood, but with one less Y chromosome, the Chicago garage-rock duo proves that the siblings who play together, stay together.

“A brother and a sister, you kind of have this nurturing relationship,” singer and guitarist Alex White said. “There’s no alpha-male struggle or sibling rivalry. There are no politics. There’s [drummer and younger brother] Francis, and there’s me, and it’s a total 50/50 partnership. The drums and guitar are set up side-by-side on the front of the stage; visually, that illustrates how we think of this band.”

She and Francis Scott Key White were primed for lives as musicians as youths in the Windy City, enchanted with the classic-rock tunes — Rolling Stones, The Who — that poured through the family’s stereo and the limitless underground punk gigs to enjoy every night.

“Our parents had such great taste in music, it was very easy for us to fall in love with music at a really young age,” Alex White said. “When you grow up with rock ’n’ roll as part of your family life, that just becomes who you are.”

After her stints in a number of acts, the two decided to make a go of it as a brother-sister duo. White Mystery was formed on April 20, 2008 — their grandmother’s birthday, incidentally — and released its self-titled debut exactly two years later, then a follow-up on that same date in 2011; its third album, Telepathic, drops this April 20.

“It was kind of serendipitous,”said Alex White. “That wasn’t what we planned to do from the start. It just naturally evolved, and it’s kind of like clockwork now.”

“We’ve grown a lot, fortunately, as musicians and songwriters,” she said. “There’s interesting sonic textures; whereas we used to be in our early 20s, playing as loud and fast as we could, we really put some thought into this production-wise. We’ve come a long way, but it’s that same visceral feeling as all our music has ever had.”

The title is a nod to the unwavering mental link the sibs share, one that goes deeper than just being bandmates.

“There is quite a bit of subconscious communication that happens in terms of anticipating one another,” she said. “When we are playing, we rarely stop, and most of the time, we don’t have a set list. We just know what to play next. We are very, very close, and Telepathic is a representation of that. It is the culmination of our 25-year friendship.”