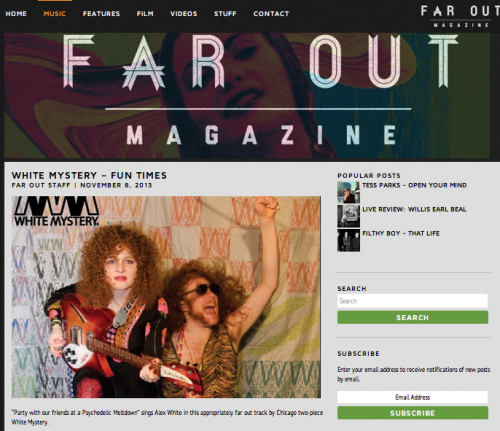 “Party with our friends at a Psychedelic Meltdown” sings Alex White in this appropriately far out track by Chicago two-piece White Mystery.

Lifted from the band’s third full-length album ‘Telepathic’, Fun Times is two minutes of raw garage rock, the cool and aloof sounds of late sixties America, which can be looked back on somewhat as the embryo of the punk sound.

You get a hark back to the British invasion and its eventual impact on American garage rock acts of that time like the Sonics or the Seeds, with their crude use of few chords and distortion. The influence of those British ‘beat’ groups is evident on this song, channeling the sound of songs like Gloria by Van Morrison’s ‘Them’ – taking that iconic melody and carrying it under a the delightfully simple stomp of a kick drum, embellishing it with lyrics almost reminiscent of a beat poem.

The great thing about Fun Times, like the music it is inspired by, is that it is effective in its simplicity. It’s the type of sound that is pretty easy to play in theory but needs characters with enough attitude to pull it off. That’s where White Mystery come in handy; two fiery redheads with a growing reputation for the high-energy performances that have helped them to achieve critical acclaim from a range of angles.

So take in our delightful Track of the Day, and remember – if you’re going to have a psychedelic meltdown, make sure your friends are there.