“In the Garage Alliance,” Dallas Observer 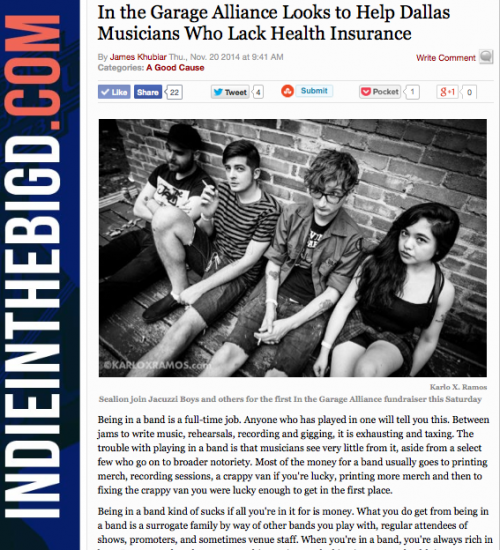 Being in a band is a full-time job. Anyone who has played in one will tell you this. Between jams to write music, rehearsals, recording and gigging, it is exhausting and taxing. The trouble with playing in a band is that musicians see very little from it, aside from a select few who go on to broader notoriety. Most of the money for a band usually goes to printing merch, recording sessions, a crappy van if you’re lucky, printing more merch and then to fixing the crappy van you were lucky enough to get in the first place.

Being in a band kind of sucks if all you’re in it for is money. What you do get from being in a band is a surrogate family by way of other bands you play with, regular attendees of shows, promoters, and sometimes venue staff. When you’re in a band, you’re always rich in love. But more often than not, one thing artists are lacking is access to health insurance.

Here’s the thing about music: It does not exist in a vacuum. Real life happens. People get hurt and people get sick. If a musician is really lucky, they have a good enough day job to provide insurance and take care of them when stuff happens. This is rare; consider the gainfully employed and insured musicians out there the 1 percent. The other 99 percent are basically left to fend for themselves. I’ve seen musicians bust their heads open and outright refuse and physically fight to keep from going to the hospital because they couldn’t cover the expenses. It is a sad state of affairs and as much of a commentary about the current healthcare climate of this country as it is the insolvent life of a musician.

The Dallas music community, surrogate family that it is, has begun a new initiative called In the Garage Alliance, formed by Dallas garage rock patron Greg Strong and Parade of Flesh Productions boss John Iskander, which hopes to change the way scenes protect their musicians going forward.

Strong explains that In the Garage Alliance grew out of his friendship with Iskander, whom he’d known from several years of attending Parade of Flesh shows. “A combination of wanting to channel my music passion for good causes, much respect for the young touring bands that play for love/the craft/gas money, being inspired by others devoted to the cause (HAAMS, Sweet Relief for example) or their own personal passions (education, homelessness etc) I decided to focus on local musicians health and emergency support,” he says. “Luckily, John also saw a need, had a similar passion about the mission and has been central in getting the show lined up and the community involved.”

In the Garage Alliance was formed a few months ago and, Strong acknowledges, it was named for a Weezer song. “I think we are in the ‘Golden Age of Garage’ and with so much talent, local and national, it felt right to honor the genre in the name, in good deeds and ethos,” he explains.

In the Garage Alliance, through Iskander’s Parade of Flesh booking outfit, plan to put on fundraiser shows to help with the organization’s cause. The first show is this Saturday, November 22 at Club Dada with some of the nation’s finest garage rock acts in Jacuzzi Boys, Ex-Cult and White Mystery while being flanked by locals Sealion and Bummer Vacation.

“First shows are always hardest and this one has been no different as we learn and figure out how to advance the cause,” Strong says of the preparation for this weekend’s event. “After the show we will meet and plan out the 2015 calendar. We are looking at how other successful music-oriented charities raise funds and will learn from them and we hope to have a range of shows to put on next year from an actual garage to larger venues.”

What about going forward? For a community that is often overlooked as an abstraction, In the Garage Alliance paints a human face on the musician community. They bleed and get sick just like all of us. As for whether other music communities will get inspiration from In the Garage Alliance, Strong says, “I certainly hope it increases on a larger scale in different cities. There are many musician -entered charities all over the country already doing important work and any additional support would be great.”

Hit the show at Dada Saturday night, enjoy some great music and make an invaluable contribution towards musicians that buying a shirt or CD could never say. It is one thing to say “I like your music” and another to say “I care about your well-being.”