“They rock harder than any family band,” VICE 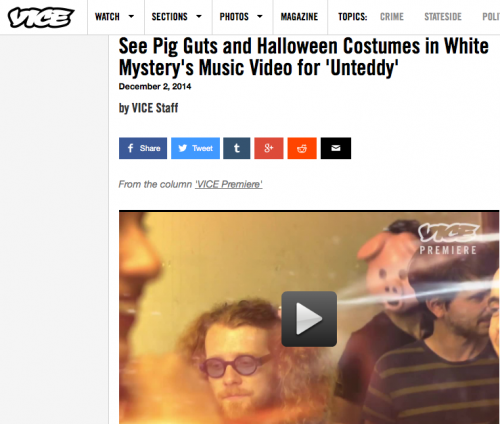 The last 20 years have been full of two-piece garage rock outfits with colors in their names. For a while it was even hard to tell them all apart. The White Stripes even tried to stand out by lying about being siblings—but nobody really bought that.

Chicago-based White Mystery is another in the line of guitar-and-drums duos, but they don’t have to pretend to be related to get ahead. They’re brother and sister for real, and their matching red muppet-manes of hair proves that they sprang from the same ginger gene pool. They also rock harder than any family band since the Shaggs.

White Mystery don’t give much of a shit about the current trends in music. They aren’t draping their songs in layers of synths or making beats out of 17 finger snaps triggered at the same time. They’re just doing them. If we’re going by the video for “Unteddy,” a song off their new double album, Dubble Dragon, “doing them” apparently involves lots of blood, Halloween costumes, and pig guts.​ If you don’t like good old-fashioned American rock ‘n’ roll and green wigs, find something else to watch.

White Mystery will be in Miami this Friday for Audio Junkie’s Art Basel Distraction, then their December tour will continue through Florida, hit Puerto Rico, and land in Chicago for New Year’s Eve. Check out their tour dates ​h​ere.