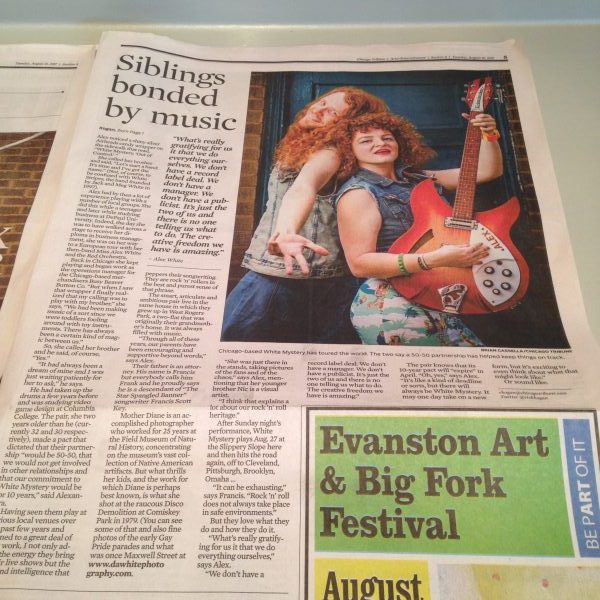 The next time the brother-and-sister band named White Mystery is scheduled to play is Sunday at 8 p.m., when they are scheduled to be among the many performers at the Glenwood Avenue Arts Fest (www.glenwoodave.org). It’s a relatively modest stop on what has been for them a nearly 10-year-long, staunchly independent and wildly active journey that has taken them to 22 countries on three continents.

Their names are Alexandra and Francis Scott Key White, she the guitar-playing vocalist best known as Miss Alex White, he the drummer-vocalist. Both have flaming-red hair, collaborate writing songs and have a burning desire to make music.

“I am innately compelled to play music,” says Alexandra. “I have ever since hearing the Who for the first time. I was in fourth grade and the feeling was so overwhelming. A ‘eureka’ moment.”

Francis says, “I play because I have to. I have always been drawn to music. What else could I do?”

They have played more than 1,000 shows. They have released a steady stream of songs and albums. They have a nurtured a loyal following here in Chicago, which remains their home base, and in other cities. They have made a feature-length film, “That Was Awesome,” shot in cities across the country during a three-month White Mystery tour, and which premiered at the Chicago International Music & Movies Festival in 2015; the siblings wrote, directed, produced and starred in the movie, with their father providing narration. Earlier this month they launched an online TV show which they call “first ever rock ’n’ roll video game fusion live stream” (www.whitemysteryband.com).

“It has been quite an adventure, ongoing,” says Alex, who also recently started a blog at www.riotfest.org, where she writes, “I am here to tell you that it is actually possible to make a living as punk musicians in the 21st century and remain completely self-reliant.”

This adventure formally began, to be very precise, on April 20, 2008, when Alex noticed a shiny silver Airheads candy wrapper on the sidewalk that read, “White Mystery, ‘Out of Control.’”

She called her brother and said, “Let’s start a band. It’s time and I’ve got the name.”

She had by then a lot of experience playing with a number of local groups, while a teenager and later while studying business at DePaul University. Indeed, the day she was to have walked across a stage to receive her diploma in business management, she was on her way to a European tour with her then-band Miss Alex White and the Red Orchestra.

Back in Chicago, she kept playing and began work as the operations manager for the Chicago-based merchandisers Busy Beaver Button Co. “But when I saw that wrapper I finally realized that my calling was to play with my brother,” she says. “We had been making music of a sort since we were toddlers fooling around with toy instruments. There has always been a certain kind of magic between us.”

So, she called her brother and he said, of course, “Yes.”

“It had always been a dream of mine and I was just waiting patiently for her to ask,” he says.

He had taken up the drums a few years before and was studying video game design at Columbia College. The pair, she two years older than he (currently 32 and 30 respectively), made a pact that dictated that their partnership “would be 50-50, that we would not get involved in other relationships and that our commitment to White Mystery would be for 10 years,” says Alexandra.

Having seen them play at various local venues over the last few years and listened to a great deal of their work, I not only admire the energy they bring to their lives show but the drive and intelligence that peppers their songwriting. They are rock and rollers in the best and purest sense of that phrase.

The smart, articulate and ambitious tandem lives in the house in which they grew up in West Rogers Park, a two-flat that was originally their grandmother’s home. It was always filled with music. “Through all of these years, our parents have been encouraging and supportive beyond words,” says Alexandra.

Their father is an attorney. His name is Francis but everybody calls him Frank and he proudly says he is a descendant of “The Star-spangled Banner” songwriter, Francis Scott Key.

Mother Diane is an accomplished photographer who worked for 25 years at the Field Museum of Natural History, concentrating on the museum’s vast collection of Native American artifacts. But what thrills her kids, and the work for which Diane is perhaps best known, is what she shot at the raucous Disco Demolition at Comiskey Park in 1979. (You can see some of that and also fine photos of the early Gay Pride parades and what was once Maxwell Street at www.dawhitephotography.com.)

“She was just there in the stands, taking pictures of the fans and of the chaos,” says Alex, mentioning that her younger brother Nic is a visual artist. “I think that explains a lot about our rock ‘n’ roll heritage.”

After Sunday night’s performance, White Mystery plays on August 27 at the Slippery Slope here and then hits the road again, off to Cleveland, Pittsburgh, Brooklyn, Omaha… “It can be exhausting,” says Francis. “Rock and roll does not always take place in safe environments.”

But they love what they do and how they do it.

“What’s really gratifying for us it that we do everything ourselves,” says Alex. “We don’t have a record label deal. We don’t have a manager. We don’t have a publicist. It’s just the two of us and there is no one telling us what to do. The creative freedom we have is amazing.”

The pair knows that their 10 year pact will “expire” next April. “Oh, yes,” says Alex. “It’s like a kind of deadline or sorts but there will always be White Mystery. It may one day take on a new form but it’s exciting to even think about what that might look like.”