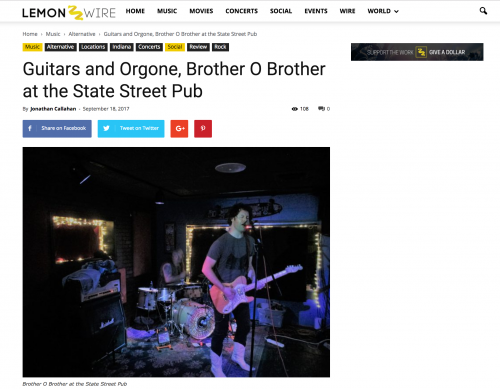 INDIANAPOLIS- When you hear an act like Brother O Brother perform live, a question pops to mind. It’s a question which goes something like this: what is it that gives genres like the blues or punk, or garage rock their wild energy? That primal, gutbucket élan vital which Wilhelm Reich might call orgone.

Maybe it’s the rawness of the music. That naïve, unrestrained way in which these musicians perform their material. Critics like Lester Bangs certainly thought so. Likewise, it might be the genre’s intensely personal nature. The kind of personal you get when an artist fixes their ideas to a medium with no outside interference. Irwin Chusid, author of the outsider music compendium Songs in the Key of Z, would say yes.  Maybe it’s something undefinable. Who knows? Come to that, who cares? Garage rock and music like it have a power that gets inside you and makes you jump. An Energy that sends you rocketing towards the stage, screaming like a celebrant in a pagan temple. After all, in the face of power like that, do the origins of that power really matter?

It’s with this mindset that I approach the music I heard Wednesday, September 13th in the State Street Pub, because I heard powerful music that night, brothers and sisters. Powerful music indeed. Brother O Brother and their opening act, White Mystery, were both in top form. Granted, I don’t think that it was like watching the Ramones give their first show. It would be disingenuous to say so. A person almost never knows when they’ve come a nodal point in history like that. All the same, I came away satisfied that I had caught a show worth squeezing into the tiny Southside bar for.

The State Street Pub is a small, intimate venue.

A hole in the wall (in the best sense) like the small bars in New York which gave birth to the likes of Patti Smith or the Velvet Underground. Since the bar’s small size precludes large crowds, the music becomes more concentrated. Consequently, it spreads through any given crowd like the best kind of infection. This is conducive to garage rock, which has an intimate quality irrespective of how loudly garage rockers play.

The show began a little late, as shows in bars often do.

I actually arrived just as a local artists forum called Putty was wrapping up, afraid that I had been late for the music. I needn’t have worried. Putty cleared off and after the staff finished rejiggering the stage, I got my first look at White Mystery. Never let anyone tell you that a band must have at least three pieces to perform correctly. White Mystery acquitted themselves just fine with one-two punch of guitar and drums. In fact, watching an act like White Mystery was enough to make me wonder if anything more than a guitar and drum kit is gilding the lily.

White Mystery has an intense style that puts me in mind of the Ramones, crossed with Janis Joplin. Add some classic 70s rock, and you’ll get pretty close to what I’m talking about. I wouldn’t call it punk, not quite. Although, the music certainly had a punk sort of energy to it. The guitarist and vocalist, same person, blasted surging riffs from her guitar while the drummer backed her with furious rhythm. The audience dug it, as did I, and by the time White Mystery left the stage we were hungry for more.

Their performance gave me cause to reflect on the difference between a live show and a studio recording. Brother O Brother’s albums carry that wild energy, but it’s nothing compared to what they give off live.

BOB frontman Chris Banta told me, in a friendly chat just after the show, that one of their biggest influences is MC5. That same Detroit-based proto-punk band famous for being the first to use the word “motherf***er” in a recording. I find the comparison to be apt. Both MC5 and BOB play at a feverish pace with the volume cranked to the max.

The sound they get out of those two instruments is raw and powerful. Raw power in the Iggy Pop sense. Chris Banta’s guitar seared the air as he howled and bellowed, hitting Hendrix-style chords to blow you out of your socks. Warner Swopes battered his drum kit like a man possessed by an ancient Viking warrior. Towards the end of their set, BOB left the stage and mingled with the audience. Chris Banta mounted the bar and played on as he swung and dipped. He exchanged instruments with Warner Swopes, who began bowing the strings of the guitar with one of his drumsticks. In sum, a delightful insanity ensued.

Finally, the show concluded and we of the audience fell back into our seats lank and spent. We went home that night infused, each of us, with enough raw energy to power Main Street. That alone was worth the $2 cover charge.