“Rock’n’roll as smoldering as their hair color,” Chicago Tribune 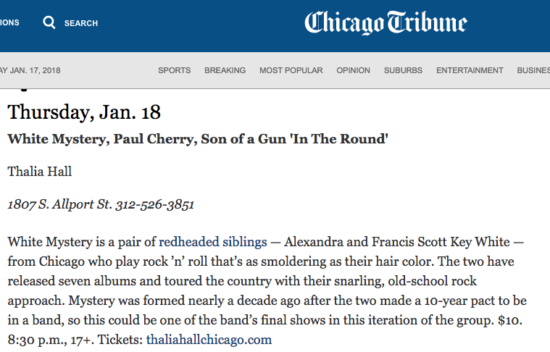 White Mystery, Paul Cherry, Son of a Gun ‘In The Round’

White Mystery is a pair of redheaded siblings — Alexandra and Francis Scott Key White — from Chicago who play rock ’n’ roll that’s as smoldering as their hair color. The two have released seven albums and toured the country with their snarling, old-school rock approach. Mystery was formed nearly a decade ago after the two made a 10-year pact to be in a band, so this could be one of the band’s final shows in this iteration of the group. $10. 8:30 p.m., 17+. Tickets: thaliahallchicago.com