“Chicago’s White Mystery…knows how to work a crowd,” Houston Press 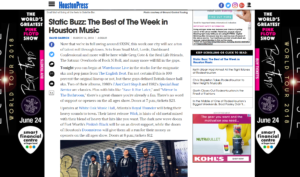 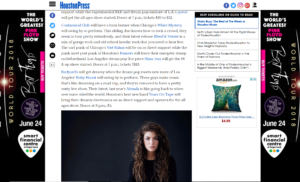 Static Buzz: The Best of The Week in Houston Music

Now that we’re in full swing around SXSW, this week our city will see a ton of talent roll through town. Sets from Snail Mail, Lorde, Dashboard Confessional and more will be here while Greg Cote & the Real Life Friends, The Satanic Overlords of Rock N Roll, and many more will fill in the gaps.

Tonight you can begin at Warehouse Live in the studio for the enigmatic ska and pop jams from The English Beat. I’m not certain if this is 100 percent the original lineup or not, but these guys defined British dance hall ska. Two of their albums, 1980’s I Just Can’t Stop It and 1982’s Special Beat Service are classics. Plus with hits like “Save It For Later,” and “Mirror In The Bathroom,” there’s a great chance you’re already a fan. There’s no word of support or openers on the all ages show. Doors at 7 p.m.; tickets $23.

Upstairs at White Oak Music Hall, Atlanta’s Royal Thunder will bring their heavy sounds to town. Their latest release Wick, is hints of old metal mixed with their blend of heavy that hits like you want. The dark new wave doom of Fort Worth’s Pinkish Black will be on as direct support, while the doom of Houston’s Doomstress will give them all a run for their money as openers on the all ages show. Doors at 8 p.m.; tickets $12.

On Thursday you could head to White Oak Music Hall downstairs to catch the sludge metal of New Orleans’ Eyehategod. These guys have been going strong since the late eighties and their live shows are typically nuts. The hardcore crossover craziness of New York’s Cro-Mags will be on as direct support while Houston’s Pyreship will bring their intense metal on beforehand. The Pose will get the all ages show started. Doors at 7 p.m.; tickets $22.

You can get your psych rock kicks at Rudyard’s when Howard and the Nosebleeds swing by to drop jams from this year’s Get Psychic!. Singer songwriter Julian Kerins will be on as direct support and the alt rock of New York’s Aron Street will swing by prior. The soulful blues rock of New York’s Carrie and the Cats will also perform while the solo sounds of Balancing Lipstick will get the 21 & up show started. Doors at 7 p.m.; tickets $5.

Upstairs at White Oak Music Hall, the Dwarves will bring their brand of Chicago punk back to town. While the band is on the cusp of their 35th year together, they haven’t really slowed down in a long time. Their shows are typically crazed and their latest drop Take Back the Night is their best in years. The high energy sounds of The Satanic Overlords of Rock N Roll will be on as direct support while The Velostacks will bring just as much energy on prior. The full throttled rock of Bayou Vimana will get the all ages show started. Doors at 7:30 p.m.; tickets $15.

Friday you can begin at the show to see is at Satellite Bar when South London’s Shame swing by to drop a raucous set. These guys play post punk with the intensity of punk, their live shows are supposed to be insane, and this year’s Songs of Praise is a pretty perfect release. The indie rock goodness of Baltimore’s Snail Mail will be on as direct support. Behind the release Habit from two years ago, this four piece has garnered a ton of praise for tracks like “Static Buzz,” and “Thinning,” while just inking with Matador Records in the process. North Carolina’s Bat Fangs will bring their unbridled rock goodness on the all ages show as openers. Doors at 7 p.m.; tickets $12 to $14.

Mucky Duck will get a little crazy when they host the country rock of Reckless Kelly outside under a big top tent. Supporting their last album Sunset Motel, this is a great show for any fan of the Austin five piece. There’s no word of support or openers for the 21 & up show. Doors at 7 p.m.; tickets $25 to $27.

Upstairs at White Oak Music Hall, Cleveland’s Dead Boys will swing by. The legendary punk band from the seventies, or Cheetah Chrome and some new guys will be on hand to play from their catalog including last year’s Still Snotty. The uniform clad punk of Houston’s The Cops will be on as direct support while Hell’s Engine will get the all ages show started. Doors at 8 p.m.; tickets $10.

Saturday you can begin your Saint Patrick’s Day at Houston Undrgrnd. Sets from The Dead Rabbits, Patterns, Escape From The Zoo and more will be on hand for the all day punk fest that’s all ages. Doors at noon, tickets TBD.

If that’s not your thing, you could head over to Cactus to catch an in-store set from Houston’s Clay Melton. Melton, who just hopped on the Billboard Heatseekers charts, will bring his fire fueled passionate sounds from last year’s Burn The Ships to life. The free all ages event has gratis beer for the adults and starts at 3 p.m.

Rudyard’s will get pretty punky for the holiday when Arizona’s Fatskinscomes to town. These guys are hardcore and should make for an interesting set. The hardcore of San Jose’s Tried & True will be on as direct support while the punk of New Jersey’s Broken Heroes will go on prior. Houston’s Liberty & Justice will add plenty of hardcore fury while Austin’s Hooligan Justice and Houston’s Hooligan 45 will open the 21 & up show. Doors at 6 p.m.; tickets $20.

Later on at Revention Music Center, you can get all of the bass you can handle when Excision swings by to drop  set. The Canadian DJ and producer has been known for some time to have the ability to get feet moving, and his latest release Virus: The Remixes is definitely a banger. The 18 & up show has no openers. Doors at 8 p.m.; tickets $40.

On Sunday you can start off over at Rockefeller’s when the chill wave of Gus Dapperton swings by. Dapperton makes music that’s layered and relaxed, proving that New York isn’t as harsh as you’d think. His shows have been selling out all over, and his latest drop You Think You’re A Comic!is full of chill tunes. Houston’s children of pop will be on hand as direct support while the experimental R&B and dream pop mixture of L.A.’s pastelwill get the all ages show started. Doors at 7 p.m.; tickets $10 to $12.

Continental Club will have a barn burner when Chicago’s White Mysterywill swing by to perform. This sibling duo knows how to rock a crowd, they seem to tour pretty relentlessly, and their latest release Blood & Venom is a mix of garage rock and old school howlin’ rock that you need to hear live. The surf punk of Chicago’s Viet Rahm will be on as direct support while the punk meet post punk of Houston’s Ruiners will leave their energetic stamp on beforehand. Los Angeles dream pop five piece Slam Jem will get the 18 & up show started. Doors at 7 p.m.; tickets TBD.

Rudyard’s will get dreamy when the dream pop meets new wave of Los Angeles’ Ruby Haunt will swing by to perform. These guys make music that’s like dreaming on a road trip, and they’re rumored to have a pretty nutty live show. Their latest, last year’s Nevada is like going back to when new wave ruled the world. Houston’s best new band Tears On Tape will bring their dreamy electronica on as direct support and openers for the all ages show. Doors at 8 p.m.; $5.

Monday you have some options, starting with Lorde at Toyota Center. In a seemingly short time frame, the New Zealand artist has proven herself to be a real force in music, her live shows are supposed to be an emotional ride, and her last release Melodrama was one of the best albums of last year. Run The Jewels will bring their hip hop on as direct support while Sweden’s Tove Styrke will get the house moving as opener for the all ages show. Doors at 6 p.m.; tickets $39.50 to $99.50.

Upstairs at White Oak Music Hall, U.K. based four piece Pale Waves will bring their dance pop to life. Creating really catchy songs, this group will make you want to get your dance on when they play from this year’s ALL THE THINGS I NEVER SAID. South London’s INHEAVEN will get the all ages show started. Doors at 7 p.m.; tickets $13.

Downstairs at White Oak Music Hall, the pop jams of Sylvan Esso will return suspiciously before playing like five days later on In Bloom Fest. That being said, the duo is massively popular and last year’s What Now is pretty infectious. New York’s Suzi Analogue will get the all ages show started. Doors at 7 p.m.; Sold Out.

Tuesday you also have some options that begin with the emo sounds of Dashboard Confessional over at House of Blues. Returning after eight years, these guys always bring the energy when they play and their latest release Crooked Shadows is a return to form. Philadelphia’s Beach Slang will get the room moving with their catchy blend of fuzzy rock. Doors at 5:30 p.m.; tickets $33.60 to $59.60.

If that’s not your thing, then head to Satellite Bar for the screamo sounds of the Bay Area’s Outlier. One of the craziest and most intense bands I’ve ever seen, their latest release Live ’17 is a trip to say the least. The noise rock meets post hardcore of Florida’s Arms will be on as direct support while the proggy sounds of Filthy Young Impalers will go on prior. The post rock meets punk of Houston’s Le Chien Freud will get the all ages show started. Doors at 6 p.m.; tickets $8.

Downstairs at White Oak Music Hall, the one and only Albert Hammond Jr.will bring his catchy rock songs back to town. Sure, he is the guitarist of The Strokes, but his solo stuff is pretty spectacular and this new album Francis Trouble is his best to date. Not to be outdone, the catchy and crazed energy of Spain’s Hinds will be on as direct support and opener, and they’re an act you need to see sooner than later. The all ages show could easily sell out. Doors at 7 p.m.; tickets $16 to $18.

In the studio at Warehouse Live, the peach panther himself, Riff Raff will drop a set. While many have made quips about this cartoonish rapper, they guy can spit on a mike all day, and his shows are pretty lit. His latest, Cool Blue Jewels is on par with his past releases. There’s no word of openers for the all ages show. Doors at 8 p.m.; tickets $20 to $23.

Big Top will get groovy when New York’s BoyToy swing by to drop their blend of garage tinged pop rock. The trio has been making waves recently and their latest Putty is hard not to like. The eclectic garage sounds of Champagne Superchillin’ will be on as direct support while Houston’s Flower Graves will get the 21 & up show started. Doors at 8 p.m.; tickets TBD.

That’s it for this week, but it’s a packed one. Don’t forget that while green beer looks cool, getting home safe and drinking like an adult is in everyone’s best interest, so stay safe and smart.