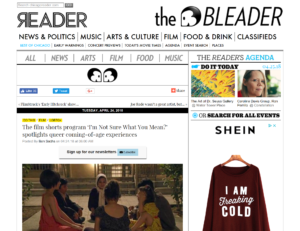 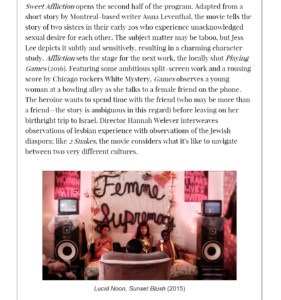 Tomorrow night at 8 PM, Logan Square’s multipurpose arts space Comfort Station will host a free program of short, queer-themed films that were made over the past several years. The program is titled “I’m Not Sure What You Mean?,” a witty summation of the themes reflected in the works. The six shorts consider not only queer identity, but also, per guest curators Rebecca Ladida and Jess Lee, “the feeling of being lost in translation and the necessity to make new languages, with all the hesitations, uncertainties, and ellipses this entails.” Such a description might suggest a program of heady, theory-driven works, but the selections are in fact entertaining and emotionally relatable—a few are even laugh-out-loud funny. Ingratiating in tone, the shorts inspire enormous sympathy with their subjects, some of whom describe growing up queer in hostile environments.

The inclusive nature of “I’m Not Sure What You Mean?” dovetails with that of Comfort Station, which aims to showcase the wide range of film curation currently happening in Chicago. “We wanted to invite curators from smaller spaces,” says Comfort Station programmer Raul Benitez, who came up with the idea of the space’s current guest curator series. “There’s a lot of great DIY curation going on in the city, and we wanted to team up with some of these curators, to give them more of a spotlight.” Some of the recent curators to have programmed work at the space include Emily Hutchings, of the Logan Square gallery Hume, and author Ytasha L. Womack (Afrofuturism: The World of Black Sci-Fi and Fantasy Culture), who has organized numerous screenings on the south side. Coming in May are collaborations with the First Nations Film Festival, which showcases movies by and about Native Americans, and with Hiromi Ueyoshi, who programs the Queer Film Series at Hume.

Benitez specifically reached out to Ladida because he had worked well with her in the past. “Rebecca used to be a programmer for the Reeling Film Festival,” he notes. “A couple years ago, she helped us get a couple screenings [at Comfort Station] as part of the festival. We had screenings for Reeling out on our lawn, which was great. So I thought she was an obvious choice to come and curate this year.” Ladida has also presented work at Comfort Station as part of her ongoing series “Inhabit,” which presents films at various spaces around Chicago. “She has a reputation for being an exciting curator,” says Benitez, “so I think we’re going to have a good turnout for the screening.”

Ladida also expresses optimism about the program, which she and Lee presented in Montreal last month. “Jess approached me [in the winter], and said, ‘I have this new film [Sweet Affliction], it’s a coming-of-age story,'” Ladida recalls. “I don’t usually program with genres; I’m more about questions and problems that I want to tackle. But we ended up circulating ideas around her film about the awkward intimacy that queer kids experience when they realize they don’t quite fit the [social] codes and are trying to find their place in the world.” The pair met weekly to brainstorm ideas for the program, ultimately deciding on five other works that complimented the themes of Sweet Affliction. They ended up with a two-part program, with three shorts that explore the experience of children and three that consider the experience of young adults.

Anahita Ghazvinizadeh’s Iranian work When the Kid Was a Kid (2011) opens “I’m Not Sure What You Mean?” Reminiscent of Alain Berliner’s feature My Life in Pink (1997), it centers on a little boy in Tehran who enjoys dressing up in women’s clothes. Ghazvinizadeh follows the character as though filming a documentary, with fly-on-the-wall shots that depict him attending a dress-up party with several of his friends. The other children all accept the boy, giving When the Kid an air of good cheer. (No adults are present, however, leading one to wonder how the grown-ups in the boy’s life might react to his transvestism.) Ladida and Lee were drawn to the film because of its gentle humor. “In the evolution of my queer politics, [humor] is an important survival tool,” says Ladida. “It can be really hard, even dangerous, for kids to be queer, so it can help to laugh at the awkwardness [they experience].”The program continues with 2 Snakes (2015), an autobiographical piece by Chinese-Canadian filmmaker Kristin Li. In this work, Li juxtaposes a well-known Chinese myth about two snake spirits who assume human form with reflections on her own coming-of-age as a queer Chinese immigrant growing up in Canada. The filmmaker explores the theme of internal transformation, centering on eye-opening experiences where a person realizes he or she can adopt a new identity. Also integral to 2 Snakes is the theme of translation—just as Chinese culture has adapted the myth of the two snakes to reflect different periods of their history, so too does Li adapt it to reflect her personal experience. A similar act of appropriation factors into the third short in the program, former Chicagoan Rami George’s My mother and her sister always argued in arabic, i never understood what was said (2016), in which the filmmaker reminisces about his own experience as an immigrant kid over footage from a Lebanese TV show.

Sweet Affliction opens the second half of the program. Adapted from a short story by Montreal-based writer Anna Leventhal, the movie tells the story of two sisters in their early 20s who experience unacknowledged sexual desire for each other. The subject matter may be taboo, but Jess Lee depicts it subtly and sensitively, resulting in a charming character study. Affliction sets the stage for the next work, the locally shot Playing Games (2016). Featuring some ambitious split-screen work and a rousing score by Chicago rockers White Mystery, Games observes a young woman at a bowling alley as she talks to a female friend on the phone. The heroine wants to spend time with the friend (who may be more than a friend—the story is ambiguous in this regard) before leaving on her birthright trip to Israel. Director Hannah Welever interweaves observations of lesbian experience with observations of the Jewish diaspora; like 2 Snakes, the movie considers what it’s like to navigate between two very different cultures.

“I’m Not Sure What You Mean?” concludes with Alli Logout’s Lucid Noon, Sunset Blush (2015), a New Orleans-shot narrative about a taboo-breaking anarchist community. The characters include a transgender bike thief, a pair of big-bodied lesbian lovers, and at least a few sex workers; Logout shows them interacting with familial warmth and intimacy, the fusion of sleaze and good cheer recalling Sean Baker’s Tangerine. Ladida praises the work for its body- and sex-positive attitudes, as well as its optimistic portrait of “amazing punk kids that are trying to live their lives according to their own politics. You want to party with these people!” The film makes for a satisfying conclusion to the program, which is celebratory on the whole. The title notwithstanding, one can easily understand what these filmmakers mean—they want us to imagine a more inclusive culture where queer kids can easily transcend their awkwardness.