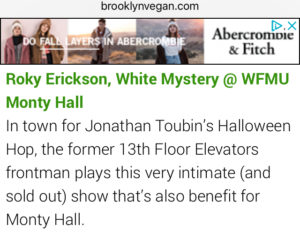 By BrooklynVegan Staff October 30, 2018 12:00 AM
You can browse our full NYC show calendar for all of tonight’s shows, but here are some highlights…

Howe Gelb @ Littlefield
Frontman for indie rock vets Giant Sand, Howe Gelb is delving “into the lost art of the piano standard” on his current tour.

Abbi Jacobson (a conversation with) @ Town Hall
Meanwhile, the other half of Broad City, Abbi Jacobson, releases her new book, I Might Regret This: Essays, Drawings, Vulnerabilities, and Other Stuff, tonight and will talk about it at this event tonight.

Ice Balloons, Shana Falana, Feral Scouts @ Trans-Pecos
TV on the Radio’s Kyp Malone lets his freak flag fly with Ice Balloons who are much more of a straight-up party than his more well-known group. Gothy artist Shana Falana and the heavy/punky Feral Scouts make for a fun triple bill.

The Psychedelic Furs @ Bergen PAC
It’s still okay to dance like Molly Ringwald, especially when seeing Richard and Tim Butler’s veteran alt-rock/new wavers trot out on the hits. “Love My Way,” “Into You Like a Train,” and “President Gas” still sound great.

Chief Keef @ Irving Plaza
Chief Keef isn’t as omnipresent as he was during the “I Don’t Like” days, but he’s stayed incredibly prolific and released at least a few other gems over the years.

For all of tonight’s shows, and tomorrow’s, check out our NYC concert calendar.