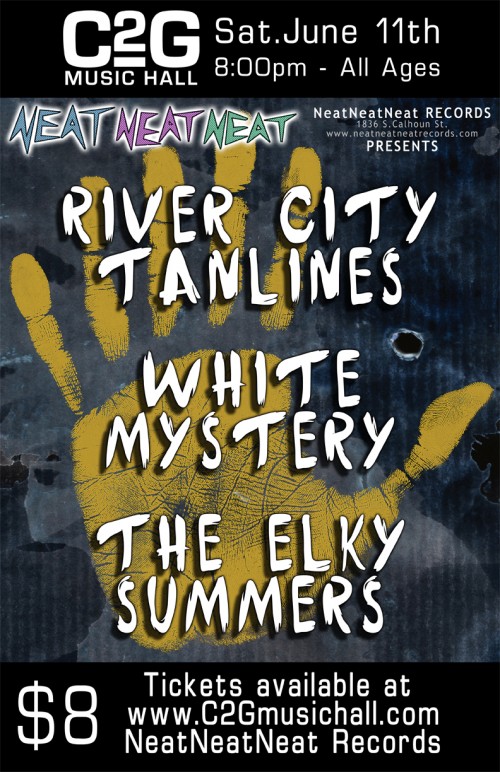 RIVER CITY TAN LINES
The River City Tanlines (the name being a play on the concept of a “farmer tan”) is a three-piece rock band from Memphis, TN. Together since late 2004, the band has toured extensively in North America and Europe playing clubs and festivals, and has eight releases on various record labels around the world. Their album I’m Your Negative was released by Dirtnap Records out of Portland, OR. Alicja Trout, the principle songwriter, is a veteran of countless noteworthy punk/indie bands over the years, including The Clears (Smells Like Records), The Lost Sounds (Empty Records, In the Red) and her other current projects, MouseRocket and Black Sunday. Likewise, the powerful rhythm section of Terrence Bishop and John Bonds are no strangers to success, having played together behind such names as Jack Oblivian, R.L. Burnside, and Monsieur Jeffrey Evans. In 2009 they appeared in Craig Brewer’s (Hustle and Flow, Black Snake Moan) web-series (and soundtrack) for MTV, Five Dollar Cover, and performed “I’m Your Negative” in a rollerderby fight scene. They also have a song (“Black Knight,” a crowd favorite at live shows) featured in the EA Sports video game Skate. This past year they won a battle of the bands organized for an episode of Samantha Brown’s Great Weekends when the show was filmed in Memphis.

WHITE MYSTERY
When Chicago’s latest contribution to the garage punk scene takes to the stage, there is no shortage of energy or eccentricities. The brother-sister duo affectionately known as White Mystery—named after the White Mystery Airheads flavor—pare down their songs to their musical core and mash out a punctuating and outright intoxicating sound.

Brother Francis White and sister Miss Alex White were born and raised in Chicago, and have developed a fan base in the Windy City that culminates from damn near every walk of life. Though their motif may be geared around their loud red fros and steady, simple punk sound, the band is in their own right a staple of the Chicago music scene.

White Mystery is a self-made organism.
They are self-recorded, self-distributed, self-managed and self-aware.

Their grassroots attitude keeps them in control of their creative identity and allows the band to make their own decisions, coming and going as they please. Miss Alex and Francis handle their own web page, fill their own record orders and book their own shows. They enjoy a certain freedom most bands can’t have. The band capitalizes on their fast and loose style and is a free radical bouncing around uninhibited.

Francis and Miss Alex came into this world musically inclined almost right out of the womb. Their parents brought them up on the likes of Cream, The Rolling Stones and Jimi Hendrix, and their psychedelic heredity shows in their music. The combo wrote their first song called “Baby Blues” at an incredibly young age. Though both were intertwined in the music scene, it was Miss Alex who worked with other bands the most.

Originally a member of Miss Alex White and the Red Orchestra, Miss Alex eventually followed her heart and teamed with her brother stating that it only seemed natural to be in a band with him. Though they can be compared to other two-people teams like The White Stripes or Matt and Kim, White Mystery brings an air of bare bones realism to the stage that other aforementioned bands can’t seem to. It’s a winning mix that seems to keep the fans coming back for more.

They broke onto the scene last year with their self-titled debut and have been increasing their following in stride. Having played major music festivals like South by Southwest and toured with other Chicago punk rock mainstays like Pegboy, White Mystery is riding a wave rivaling their raging rouge manes. The two are steadily growing a name for themselves and are currently working on recording a second album.

Their first album gained them a large fan base and their infectious stage presence solidified them in the ranks of other great Chicago garage bands like Local H, Naked Raygun and the like.

THE ELKY SUMMERS
The Elky Summers ia a 4 piece band comprised of guitar, bass, drums and keyboards. The band was formed in the spring of 2010. They have been described as sounding like a mix between early Bangles and the Velvet Underground. The band has played several local and out-of-town shows, including Indianapolis and Chicago. The Elkys are focusing on building enough revenue to go into the studio to record tracks for a 2nd limited edition release projected to be available by late summer of 2011. The First installment in the Limited Edition Summers’ Series is now available at shows and at Neat Neat Neat, in Fort Wayne, Indiana.