“They put on quite the show,” Best New Bands 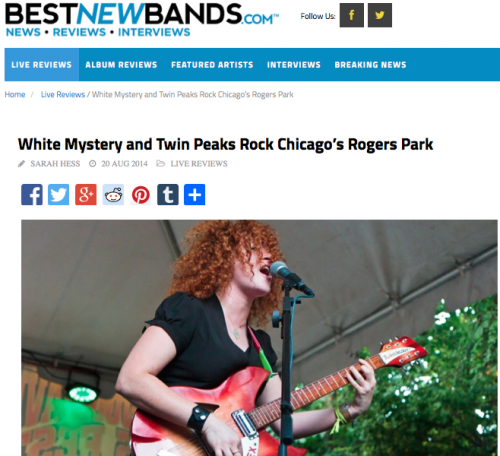 Chicago – If you haven’t heard, Chicagoans love a good street festival. There’s nothing better than taking in some people watching over a nice cold beer while listening to some of your favorite local bands just blocks from your home. This past weekend in Rogers Park, two up and coming Chicago bands played the Glenwood Ave Arts Fest. White Mystery and Twin Peaks were ecstatic to be supporting their neighborhood and performing in front of their friends, family, and neighbors. Chicago music lovers and RP residents were just as excited to see two beloved local DIY rock and roll bands play for free on a beautiful summer evening.

White Mystery is a sibling duo comprised of guitarist Miss Alex White and drummer Francis Scott Key White. The two have developed a cult following with their psychedelic rock and are known for their wild shows and curly red hair. This April White Mystery released their fourth LP Dubble Dragon. On Saturday Alex and Francis played plenty of songs off the album, like “Unteddy” and the title track, during which Alex and Francis swapped places. Alex sat behind Francis’ drum kit while wailing on guitar while Francis jumped into the crowd, reciting his singsong monologue from “Dubble Dragon.” The crowd ate it up and rightly so; they put on quite the show.

Their antics have increased tenfold since I first saw them play years ago at The Hideout. The White siblings took me back to that night, playing oldies like “Telepathic,” “Secret Garden,” and “Blood & Venom.”  At one point, Alex hit the pavement, shredding her guitar as she sprawled in front of the stage. Her signature red locks blew in the breeze as she lay, knees bent, encircled by fans. Miss White is a master on guitar and one of the best female guitarists around, who at times also happens to sound a lot like the legendary Janis Joplin.

Towards the end of their set, Francis got a little serious. He spoke into his mic: “This song’s called ‘People Power.’ It’s about the power of the people. Hold on to your power! Don’t let anyone take it from you!” He then began beating his drums and whipping his hair around. The Twin Peaks boys watched from the side of stage, cheering him on. When their set was finished, Francis threw a cracked cymbal to the ground. Cadien Lake James hobbled over on his crutches to give it a final beating, putting his weight down on it, blue cast and all.