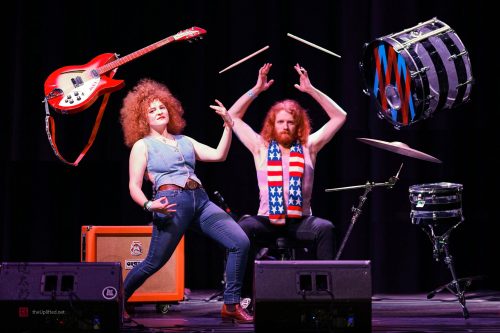 Who is the hardest working rock’n’roll duo in Chicago? Miss Alex White & Francis Scott Key White, aka White Mystery (whitemysteryband.com/), are Chicago’s Northside siblings who have been banging their red-hair to their fast paced punk rock for decades. The band has self-released seven records and played almost 900 shows on three continents.

The duo has shared the stage with thier heroes Iggy Pop, Patti Smith, The Replacements, Garbage, Thee Oh Sees, The Gories, Thurston Moore, Mavis Staples, and countless others. Witness for yourself what Pitchfork calls, “jovial rock’n’roll delivery and DIY sensibility.”

Orange Amplifiers sponsors White Mystery now as well. Here the siblings uplift their red hot instruments on a stage of Chop Shop for a show that not only rocked, but raised $2000 for adolescents with neurofibromitosis. #theuplifted