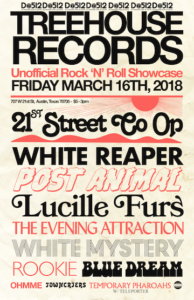 Check out White Mystery at SXSW Showcase on Friday, March 16th with these bands:

Teleporter – Teleporter encompasses sychedelic post punk with heavy doses of shoegaze and 60s garage rock, made in Portland, OR.

Town Criers – Based out of Chicago, IL, Town Criers produces a fusion of folk and rock.

Blue Dream – Blue Dream is a haze of psychedelia, blues-infused riffs, and garage-dwelling rock based out of Chicago, IL.

Ohmme -Inspired by the music scene in Chicago, IL, Ohmme is influenced by folk and avant-garde rock and yield harmony and chaos that leaves everyone wanting more.

Rookie – Rookie is a classic rock band based out of Chicago, IL.

The Evening Attraction – This Chicago, IL bop-rock band produce a fusion of rock and pop.

Lucille Furs – Lucille Furs combines psychedelic and baroque pop and is based out of Chicago, IL.

White Reaper – Based out of Louisville, KY, White Reaper is known for high-intensity shows and produce music that feels like a pure rock ‘n’ roll adrenaline shot.