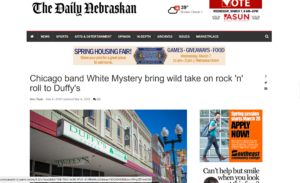 Sludge metal band Manslaughterer was originally scheduled to open the show, but they had to cancel due to illness. Laughing Falcon didn’t find out they were performing until 2 p.m. Saturday afternoon but still rocked out like they had been practicing for this one show for weeks.

Dressed in all black, Laughing Falcon cranked up their amps and wowed the crowd with their snarling guitar licks and powerful drum beats. The band rocked so hard that guitarist Nate Christiancy, playing a cherry red guitar, broke a string during their first song. Luckily, a crowd member helped restring his guitar.

By Laughing Falcon’s second song, people were filing toward the stage to get a better view. Kyle Gibson, the bassist, was slapping out beats with his transparent bass while keeping in perfect time with drummer Jordan Elfers. Laughing Falcon was a great start to the rock n roll evening at Duffy’s Tavern.

A fog machine spewing out clouds at center stage introduced Universe Contest, the Lincoln five-piece. The band exploded with energy while jamming out, mostly playing songs off their October 2017 album “Get Cot Livin’.”

Jordan Elfers, who drummed for Laughing Falcon carried those same duties for Universe Contest. His thunderous drum beats on his ocean-blue drum kit rocked the crowd, which didn’t cease headbanging for a second. Afterward, Tim said he loves performing at Duffy’s and referred to the bar as Universe Contest’s home base.

Both siblings were bursting with vigorous spirit the entire performance. Alex jumped all over the stage while swinging her guitar around and repeatedly getting down on her knees to shred. Francis shaked and vigorously banged his head around through each song.

During one song, Alex sat on Francis’ drum throne and beat the bass drum while also strumming her guitar. The sibling duo played many songs from their most recent album “F*** Your Mouth Shut.” Later, though, a member from the audience requested the band play the song “Buttheads From Mars” from their 2013 LP “Telepathic,” which they said they had not played in a very long time, but did per the request.

At the end of the show Alex White told the crowd that she and Francis love Lincoln and performing at Duffy’s. A member from the audience then shouted to White “You’re amazing,” and White responded “No, you’re amazing.”

After the show, I spoke with Alex White about Duffy’s and Lincoln as a whole.

“We have really fallen in love with the city,” White said. “Our favorite thing about Lincoln is definitely the people. We have played Lincoln Calling numerous times and love playing at Duffy’s.”

The love of rock ‘n’ roll filled the air at Duffy’s Tavern on March 3. Seats were loaded with easy-going and fun-loving fans. Each band brought the noise and kept the party rocking the whole night.