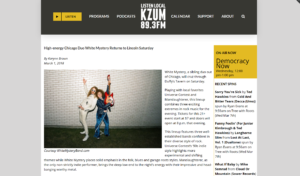 White Mystery, a sibling duo out of Chicago, will cruz through Duffy’s Tavern on Saturday.

Playing with local favorites Universe Contest and Manslaughterer, this lineup combines three exciting extremes in rock music for the evening. Tickets for this 21+ event start at $7 and doors will open at 8 p.m. that evening.

This lineup features three well-established bands confident in their diverse style of rock. Universe Contest’s ‘90s indie style highlights more experimental and shifting themes while White Mystery places solid emphasis in the folk, blues and garage roots styles. Manslaughterer, as the only non-strictly indie performer, brings the deep low-end to the night’s energy with their impressive and head-banging worthy metal.

The duo will celebrate a decade of music this April 20. Their eighth album, Fuck Your Mouth Shut, was released on the anniversary date in 2017. In their ten-year run, the group has been featured with Levi’s jeans, MTV, NPR Sound Opinion, and various Chicago outlets in addition to playing just under 1,000 shows.

On Friday, the band announced a new album, Hellion Blender, to be released on its 10th anniversary, April 20. In a release, the band wrote that “the ninth full length album from the sibling two piece from Chicago completes a remarkable mission that many bands can only dream of — release a new album, every year, on the same day.”

The group has a strong and iconic DIY-style with White’s riot-esque lyrical voice. The unruly bright-red hair of the two performers adds to the group’s characterization as a carefree, speak-your-mind garage rock. The tight dissonance of distorted guitar against cymbal and bass heavy drum riffs brings their sound a unique and excitingly chaotic heaviness.

A hallmark of White Mystery’s the do-it-yourself mentality has been their eight self-released albums, keeping them off mainstream record labels and tour routes.

Saturday’s show is one of the first on a tour through the midwest and onto the South by Southwest music festival in Austin. White Mystery will play O’Leaver’s Pub in Omaha on Sunday, before continuing on to Kansas, Missouri, Oklahoma and Texas.

No strangers to the midwest, White Mystery was featured at September’s Farnam Fest in Omaha. The group has played Omaha and Lincoln several times, including a spot on the 2016 Lincoln Calling lineup.