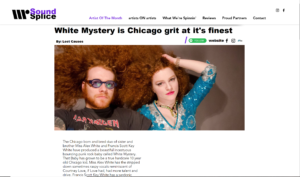 The Chicago born and bred duo of sister and brother Miss Alex White and Francis Scott Key White have produced a beautiful incestuous bouncing punk rock baby called White Mystery. That Baby has grown to be a true hardcore 10 year old Chicago kid. Miss Alex White has the stripped down sometimes raspy vocals reminiscent of Courtney Love, if Love had, had more talent and drive. Francis Scott Key White has a sardonic ominous voice akin to Gibby Haynes, that will give you chills.

White Mystery has a thru and thru DIY punk attitude and moxie. Mixed with the stripped down naked sonic sound of 90’s Chicago grunge. These attributes along with the at time sarcastic and tongue in cheek lyrics that harkens back to bands like The Waitresses an the Aquabats you have a true original sound that is unapologetically genre bending and no nonsense.​

There is a deep down in your face thoughtfulness that you don’t easily find in today’s musical landscape. And lets face it “Fuck your mouth shut” is an amazing possible title for so many things, in this day and age they have used it in a very apropos manner on their 2017 album of the same name.​

On their 2018 album Hellion Blender (yes they release a new album every year on 4/20 and have done so for the past 10 years) opens with a gnarly guitar solo leading up to Miss Alex White’s shiny vocals. On “Paint yon nails” we get a 70’s psychedelic tune where she seems to channel Grace Slick. The track “Goody two shoes” is an alt rock country punk love song that will piss you off and break your heart, but empower you all at the same time. It’s a 2:42 whirlwind of emotions with a sound track and it epitomizes the title, it takes your heart and your brain and puts them into a jar with whirring razor sharp blades and shreds them both and mixes them together for a smooth tasty result.

This is a big year for White Mystery. It’s the duo’s ten year anniversary and they have played 1000 shows across the world backing musical icons and even played on a parade float with royalty (Sir Richard Branson), if that’s not the hardworking Chicago grit I know and love I don’t know what is. If you haven’t seen White Mystery live, what the fuck are you doing with your life? Get off Facebook and go see some live music and don’t hold your fucking phone up during the whole show, live in the moment and enjoy the show. Below is an extended interview with the band….

Lets start with your listening backgrounds. Who were both you listening to before you started playing music and how has it evolved up until today?

I Grew up listening to punk and classic rock, like the Ramones, The Donnas, The Who & The Rolling Stones.

Francis listened to that music too, but he was also raised on nü metal and Insane Clown Posse. ​

What were you listening to while writing Hellion Blender and how did you decide to approach this album compared to your previous ones? ​

I maintained a traditional taste in Punk and Garage Rock, plus modern psych like the Wooden Shjips and the Dandy Warhols. Francis went down a YouTube hole listening to fan remixes of pop songs.

Take us through your previous recording process and how it has evolved after finishing Hellion Blender.

The recording of White Mystery “Hellion Blender” was no different than our previous albums, in that we go into the studio with speed, energy, and efficiency as our main goals. We bring snacks from home, make a pot of coffee, and knocked out the entire album in two days. What makes the album distinctive in the greater WM discography are the pure spoken word tracks of poetry, called “Disco Ball” and “Part Deux.”

I know you’ve written for Riot Fest’s website giving advice on how independent artists can sustain being independent.  How do you feel that your band’s independence has taken you on late night television, playing on a parade float with Sir Richard Branson, toured all around the world, and so much more?​

By maintaining our independence in the industry, we have stayed open to all the opportunities that come our way. White Mystery is self-managed, self-released, and self-booked, which is the true meaning of “DIY,” or “Do It Yourself.” We are mercenaries that can take any job we see fit, hyper mobile, and make decisions quickly. Staying fast and light makes it easy to sneak in the back door to opportunities that are normally guarded by industry gate keepers.

What’s next for the band? What should the fans get excited about?

White Mystery “Hellion Blender” will be available on limited edition vinyl this summer, which is exciting. You can catch White Mystery at Nelsonville Music Festival with George Clinton, the Decemberists in Ohio on May 31, with Kool Keith in Detroit on July 22, and in Brooklyn on July 27. We produce an outdoor festival with Do312 called Rock’n Roll Market that takes place on June 9th, check it out: https://do312.com/rocknrollmarket

Lastly, you played your 1000th show on April 20th, 2018 just tell the readers what that means to the band and how it feels.

Finishing our thousandth show on the day of our ten year anniversary provided an overwhelming sense of accomplishment and euphoria. Celebrating with our family and friends that we’ve made over the last decade was a blessing, and we thank you all for helping us get this far.