“Women rocked at Nelsonville,” The Vindicator 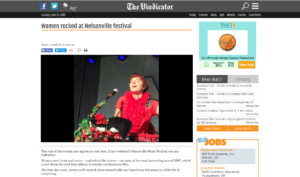 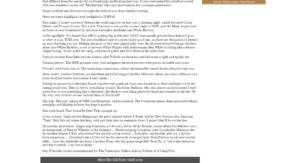 The year of the woman also applies to rock fests, if last weekend’s Nelsonville Music Festival was any indication.

Women were front and center – and behind the drums – on many of the most interesting acts at NMF, which is just down the road from Athens in woodsy southeastern Ohio.

The four-day event, always well-curated, leans toward indie and Americana but mixes in a little bit of everything.

The opening night headliner was the Black Angels, who were utterly mindblowing. If you’ve only seen a video, you might wonder how this psychedelic band could possibly transfer to the stage. But they are meant to be seen live. I’ve never seen an act this side of Pink Floyd that syncs abstract big-screen visuals with its music so well. It was mesmerizing. And by the way, Stephanie Bailey was an absolute machine on the drum kit, which was placed at the front of the stage for good reason. She was just the first of a string of female drummers at NMF.

The Decemberists were Friday’s main event, a choice that was a grand slam for NMF. The literate band hit rough waters when frontman Colin Meloy’s voice got too hoarse. He struggled and was getting increasingly frustrated until a fan named Dan came to the rescue.

He was pulled on stage and proceeded to handle lead vocals for the rest of the night. He knew the lyrics and the vocal phrasing so well that I suspected he was a ringer – or maybe the leader of the world’s greatest (or only) Decemberists tribute band.

That is until the next afternoon, when we ran into some of his Athens-area friends at a bar, who still were amazed at Dan’s performance.

George Clinton and Parliament-Funkadelic was the centerpiece Saturday, always the most well-attended day. His job was to turn it into a party, and that he did. But to do so, Clinton and his assemblage delivered a set that differed from the one he did at Stambaugh Auditorium last year. It was customized for a festival crowd, with less emphasis on the old “Mothership” hits, and more jammy for a younger generation.

Here are some highlights (and lowlights) of NMF18:

Best night: I wasn’t sure how Nelsonville could improve on last year’s opening night, which featured Conor Oberst and Parquet Courts. But it did. Thursday is always the coolest night at NMF, and the Black Angels tour de force set was bookended by Afrobeat ensemble Antibalas and White Mystery.

In the spotlight: The bands that will be getting big at this time NEXT year usually get set times before 6 p.m. or after 11 p.m. THIS year. The post-headliner spot is a particularly good one, as there are thousands of perked up ears checking you out. Making the most of this rare opportunity were the aforementioned Chicago brother-sister duo White Mystery, a sort of inverse White Stripes with frontwoman Alex White strutting like a female Angus Young. At one point she sang, and played guitar and kick drum at the same time.

Festival favorite Ron Gallo had the honors after P-Funk on Saturday and delivered a tight and quirky set.

Unsung heroes: The NMF grounds crew, who mitigated the mud patches with plenty of mulch and straw.

Person I wish I saw less of: The main stage sound man, whose interminable sound checks delayed some sets.

Most exotic: Combo Chimbito, a Colombian act led by singer Carolina Oliveros, whose was also a virtuoso on a hand-held percussive instrument I can’t name.

Taking no prisoners: Columbus-based experimental punk act Dana was ferocious in their midnight set in the campground tent. Dana is led by transfixing vocalist Madeline Jackson, who also played an instrument I can’t name (but it was something like a theremin, the electro-wave thing played by hand movements in the air). By the way, why is there no one named Dana in this band?

Hip hop: The only option at NMF was Blueprint, and he nailed it. The Columbus emcee demonstrated brilliant wordplay and blazing delivery but kept it positive.

Best rock band: That would be Deer Tick, straight up.

A star is born: Tank and the Bangas got the party started before P-Funk. Led by New Orleans diva Tarriona “Tank” Bell, this act mixes hip-hop, rock and funk into an energetic show. I expect they’ll be on the rise.

Honorably mentioned: Jangle-pop Canadian act Alvvays, led by Molly Rankin, whose sharp but delicate voice is reminiscent of Harriet Wheeler of the Sundays … Hard-charging Columbus crew Counterfeit Madison, led by vocalist Sharon Udoh, who turned her set into a tent revival … Bedouine, my favorite solo act, a Syrian-born songstress … Cincinnati duo LUNG, led by the intensely deranged Kate Wakefield on vocals and electric cello … Last but definitely not least, Caroline Rose, who has great songs like “Soul No. 5” but is also hilarious and fun to watch. Love her to death.