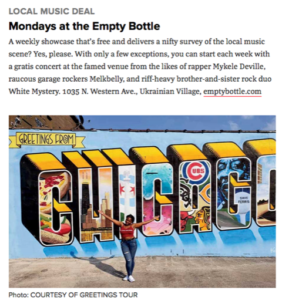 From the semi-secret front door (hidden in a faux laundromat) to mixologists who are as skilled at sleight of hand as they are at slinging drinks, an evening here is a performance from start to finish. The magicians showcase Chicago’s own style of prestidigitation — up close and immersive. 5050 N. Clark St., Ravenswood, chicagomagiclounge.com

Spot for a Kids’ Party That Isn’t Terrible

If you must attend the ninth circle of hell that is a child’s birthday, pray that it’s at Cone, where there’s not a germ-riddled ball pit to be found. Instead, this gourmet ice cream shop boasts a sundae bar, outdoor patio space, and appearances by cartoon heroine Peppa Pig or store mascot Mr. Cone. 1047 W. Madison St., Near West Side, conechicago.com

Mondays at the Empty Bottle

A weekly showcase that’s free and delivers a nifty survey of the local music scene? Yes, please. With only a few exceptions, you can start each week with a gratis concert at the famed venue from the likes of rapper Mykele Deville, raucous garage rockers Melkbelly, and riff-heavy brother-and-sister rock duo White Mystery. 1035 N. Western Ave., Ukrainian Village, emptybottle.com

The first in Victor Ving’s series of vintage-tinged Greetings From murals remains one of the most popular among visitors and locals alike. Roll up when the weather’s nice and you might actually have to wait in line to take your shot. 2226 N. Milwaukee Ave., Fulton River District

Place to Take Your Kids on a Rainy Day

This museum-within-a-museum (the Swedish American one) lets your kids wear themselves out milking a fake cow or hauling firewood to a replica stuga (that’s a farmhouse, for you non-Swedes). It’s free on the second Tuesday of the month, but even on other days, you can get the whole family into both this and the rest of the galleries for 10 bucks. 5211 N. Clark St., Anderson-ville, swedishamericanmuseum.org

The beginners’ course ($130) at this welcoming studio includes four two-hour classes and roughly enough clay to reenact the pottery wheel scene from Ghost 20 times. Love the feeling of wet clay between your fingers? Drop in on Fridays and Saturdays for the BYOB wheel-throwing happy hour ($40). 2516 W. Armitage Ave., Logan Square, penguinfoot.com

A team-building activity that doesn’t suck: Six meticulously rendered Chicago-themed options — from an apocalyptic L car to a Lake Michigan pirate dungeon (just go with it) — help you match the level of intensity to your group’s vibe. From $30. 1579 N. Milwaukee Ave. and 1342 N. Milwaukee Ave., Wicker Park, escape-artistry.com

Trendy it ain’t, but this watering hole delivers nothing if not a classic night of belting. Wireless mics let you really work the room, and the DJs will sing backup on request. 1659 W. North Ave., Wicker Park, louiespub.com

Frustrated by a lack of showcases for black burlesque performers, local cabaret legend Jeez Loueez decided to, as they say, be the change. Her seven-year-old traveling show illuminates and elevates the bawdier arts — striptease, yes, but also drag, raunch comedy, and gender-fluid theatrics — and is performed entirely by people of color. jeezysjukejoint.com

Patti Swanson may be an architectural historian, but her tours go deeper than blueprints and buttresses. Each is an hour-and-a-half adventure in a single neighborhood, with stops focusing on women-owned small businesses, immigrant cemeteries, or the city’s earliest skyscrapers, and is carefully curated by local activists, journalists, artists, and lifers. $10 to $20 suggested tip. chicagoforchicagoans.org

Riddle Me That at Logan Bar & Grill

Call it the anti–trivia night. Physical challenges level the playing field between the nerds and the noobs — as does a last-place prize — at this free-for-all. 2230 N. California Ave., Logan Square, riddlemethatgameshow.com

Place to Volunteer as a Family