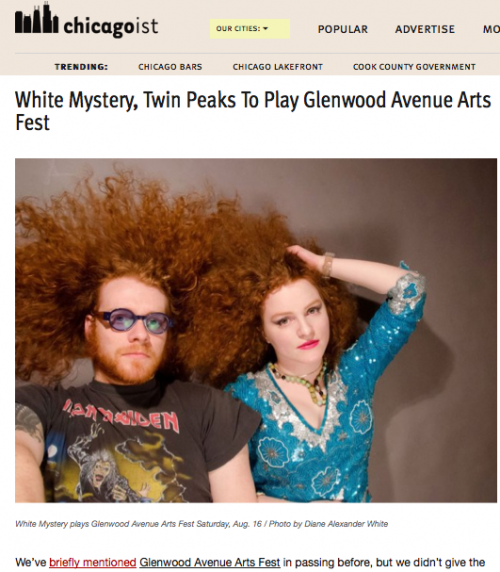 We’ve briefly mentioned Glenwood Avenue Arts Fest in passing before, but we didn’t give the fest much thought. We’re sure the art was a hit—that is, after all the focus, and last year’s installment presented just about every form of art you could imagine from more than 100 creators and performers. In the past, the musical lineup wasn’t anything we were willing to make the trek to Rogers Park for, but this year’s schedule shows a healthy improvement and surprised us with some eye-catching names.

Some 40 bands will play on three stages during this three-day event (though Friday night’s musical portion is dedicated to the Opening Night Cobblestone Jam featuring Renaldo Domino with Expo 76 and Baby Brutha). The stages are booked by local venues—Mayne Stage curates the west stage, while Lifeline Theater has the south stage.

But we’ll be spending most of our time at the north stage (Glenwood and Lunt Avenues). The lineup was selected by Heartland Cafe and Red Line Tap and will present some local favorites such as Pitchforkers Twin Peaks, redhead rockers White Mystery, as well as the Polkaholics, folk rocker Furious Frank and bluegrass act Henhouse Prowlers. Check out the full schedule below on the fest’s site.

Glenwood Avenue Arts Fest is Aug. 15 through 17 along Glenwood Ave. at Morse in Rogers Park, free