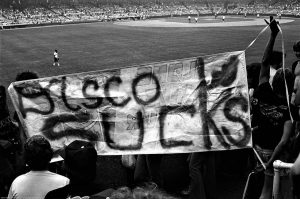 Sulzer Regional Library, Auditorium- 4455 N. Lincoln Avenue Chicago IL 60625
Saturday, July 22, 2:00 p.m.
Join us as Diane Alexander White talks through Skype with Detroit Tigers pitcher Milt Wilcox about documentary photos she shot at Disco Demolition on July 12, 1979. During the discussion, Miss Alex White of White Mystery Band will be spinning disco and rock music. On that fateful night radio DJ Steve Dahl invited fans to bring disco records to blow up between innings of a double header between the Detroit Tigers and the White Sox at Comiskey Park. Why did thousands of fans storm the field at Disco Demolition and create a riot that called in the police? What happened afterwards has become an iconic moment in music, baseball and Chicago history. Click Here to view the Facebook Invitation. See you there!

Diane’s Disco Demolition photos will be on view on both floors of the Sulzer Regional Library from July 1 – August 31, 2017. Free admission.