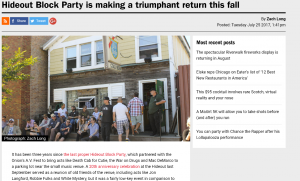 It has been three years since the last proper Hideout Block Party, which partnered with the Onion’s A.V. Fest to bring acts like Death Cab for Cutie, the War on Drugs and Mac DeMarco to a parking lot near the small music venue. A 20th anniversary celebration at the Hideout last September served as a reunion of old friends of the venue, including acts like Jon Langford, Robbie Fulks and White Mystery, but it was a fairly low-key event in comparison to past block parties.