Just when you thought White Mystery couldn’t do 4/20 any cooler, we went ahead and produced the first ever weed video game based in Chicago for Dispensary 33! Waldos Forever features a little alien who hops L trains, nabs pizza and dodges rats to make his way to the cannabis emporium. We developed the concept and united with Raft Labs to bring this 8-bit NES style game to life on mobile and desktop. Play now!

Amidst the COVID-19 pandemic, White Mystery presented 4/20/2020 online with a 420 x 4/20 x 4:20 live virtual stream that featured performances by Fred Armisen of Saturday Night Live, Cadien from Twin Peaks, Shannon Shaw from Shannon & the Clams, Rylan Wilder of Monarchy Over Monday with Neptunes Core, Brian Hurd of Daddy Long Legs, Jason Narducy of Bob Mould, Psalm One, and more super stars. Thousands of folks tuned in worldwide, and you can watch archived footage on YouTube here!

White Mystery rocked Dispensary 33 for thousands of people at Waldo’s Forever Fest in Andersonville. Big Freedia headlined and made the shake stage with authentic New Orleans Bounce Music! It was bonkers. 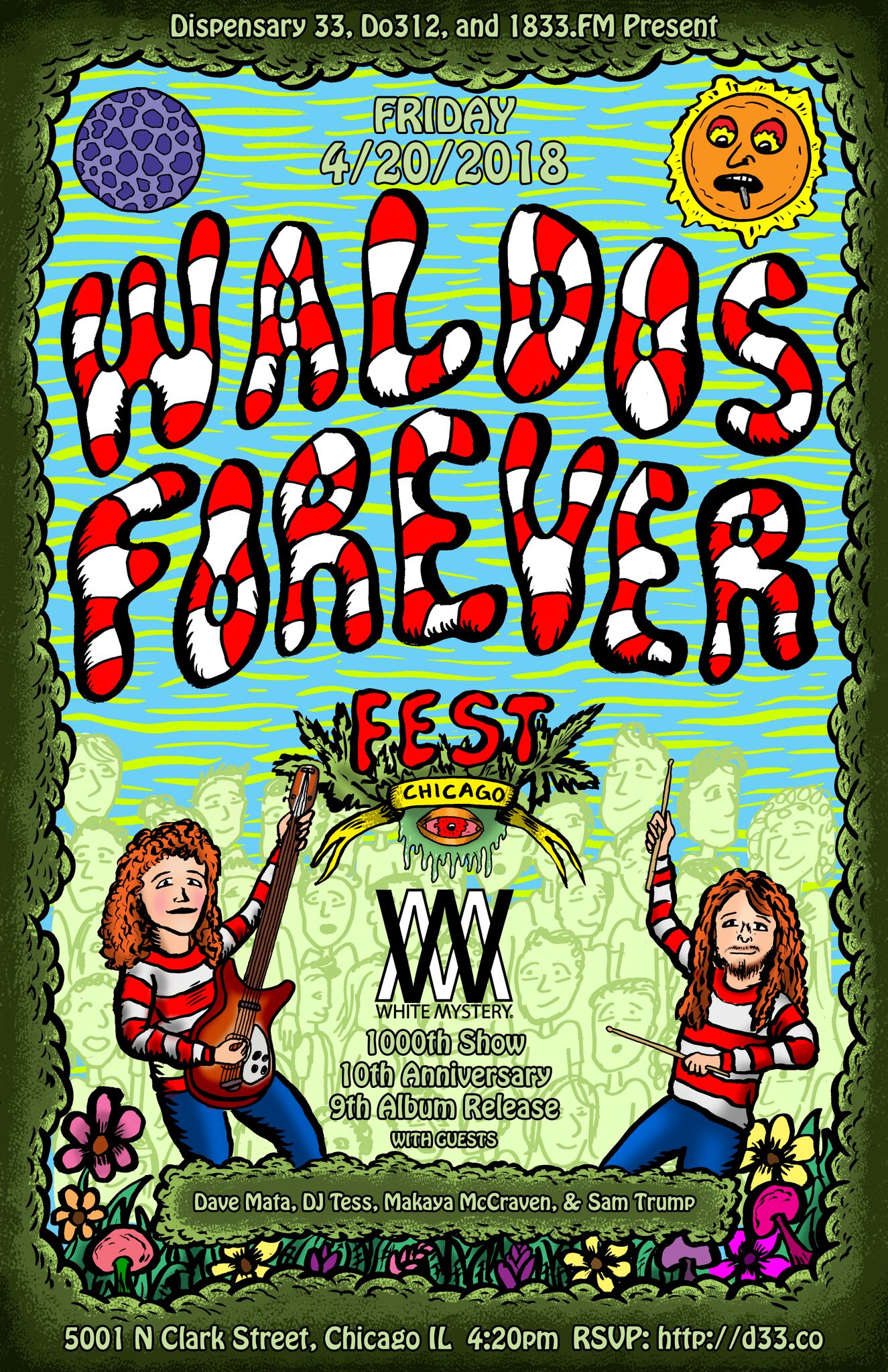 10 year anniversary…1000th show…9th record release…April 20, 2018 is the date White Mystery concludes it’s decade-long social experiment. For the past ten years, we’ve stayed 100% independent, and duked out the good fight of rocking and rolling worldwide. We will always be White Mystery, though, what happens next is truly…the mystery. 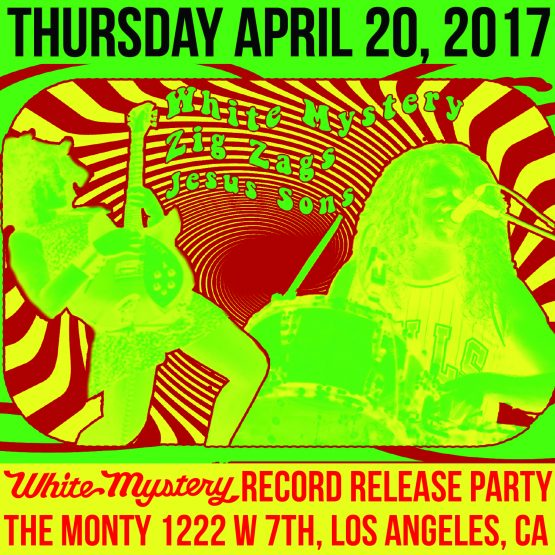 White Mystery “F.Y.M.S” record release wants to wine you, dine you, and 69 you at the Monty with Jesus Sons and Zig Zags! A good time was had by all in Los Angeles, California.

Michigan is an important mitten-shaped state to the White Mystery history and we are thankful for all that attended the OUTTA CONTROL record release party at the Pyramid Scheme! 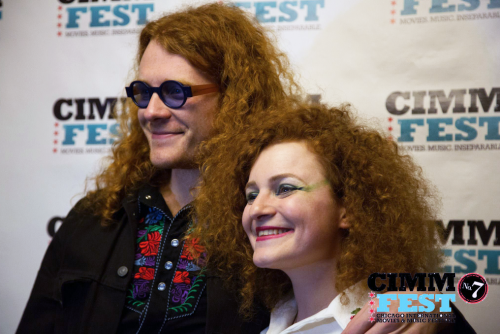 White Mystery premiered it’s first ever feature-length film, “That Was Awesome” to a sold out audience at the Logan Theatre on April 20, 2015 for the Chicago International Music & Movies Fest. Guests walked the “green carpet” and enjoyed the critically acclaimed psychedelic dark comedy produced and directed by Miss Alex White! See the trailer on VICE. 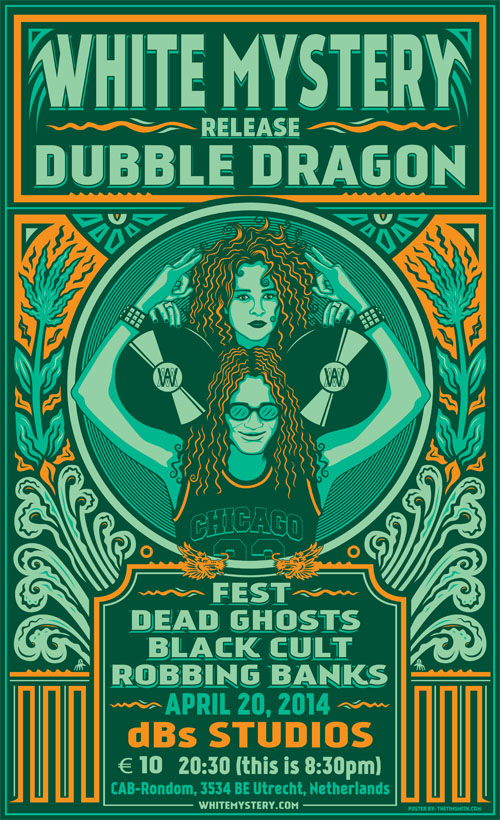 What better place to spend 4/20 than the Netherlands? White Mystery released “DUBBLE DRAGON” to a packed house at dBs near Amsterdam on April 20, 2014. The gatefold of the double album was even designed by a Dutch artist named KIKI and High Times featured the event. 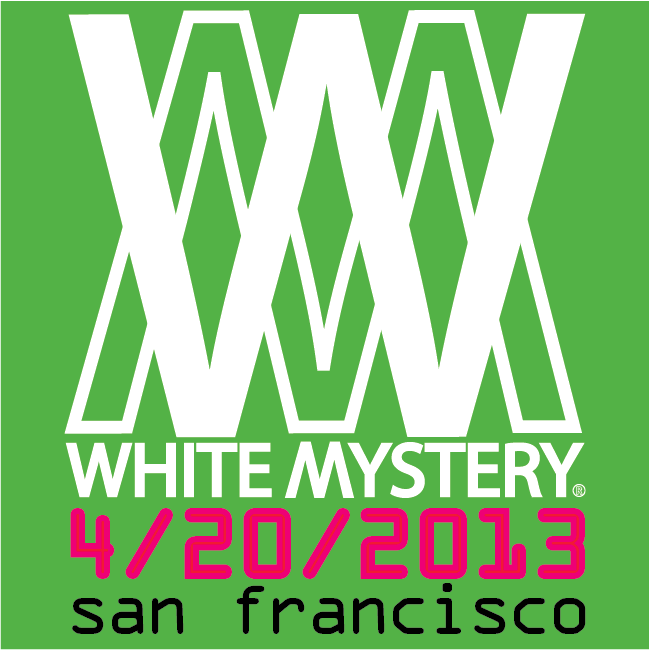 White Mystery invited 12 of it’s favorite West Coast bands to play the “PSYCHEDELIC MELTDOWN” at Brick & Mortar in the Mission on April 20, 2013 to release the third album, “Telepathic” in San Francisco. Orange Amps, Cutty Sark, and Airheads sponsored the event, and we released a White Mystery coloring book! Click for more. 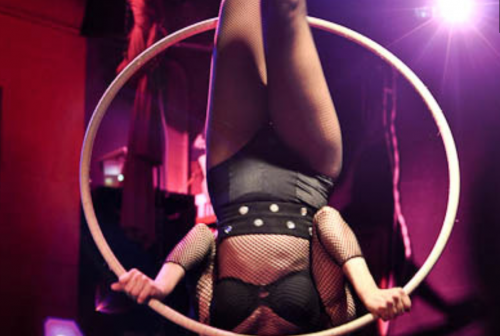 Inspired by the Rolling Stones, White Mystery organized a “Rock’n’Roll Circus” with bands, a ventriloquist, acrobats, contortionists, and video projection artists at Big Sky Works in Brooklyn, New York. The show sold out to celebrate the release of “People Power” and a memorable night was had by all— captured by Impose Magazine in these incredible photos here.

Back in 2011, there was an up-and-coming neighborhood called Logan Square, and a old dive called Pancho’s. White Mystery sold out a double header with two concerts in one night on April 20, 2011— an all-ages early show with Loose Dudes and adult show later that night with Rabble Rabble. The Onion donated a quarter page print advertisement to promote the release of White Mystery’s second album, “Blood & Venom.” More info in the original post.